A Gentle Introduction to Terrain Modeling with Grasshopper 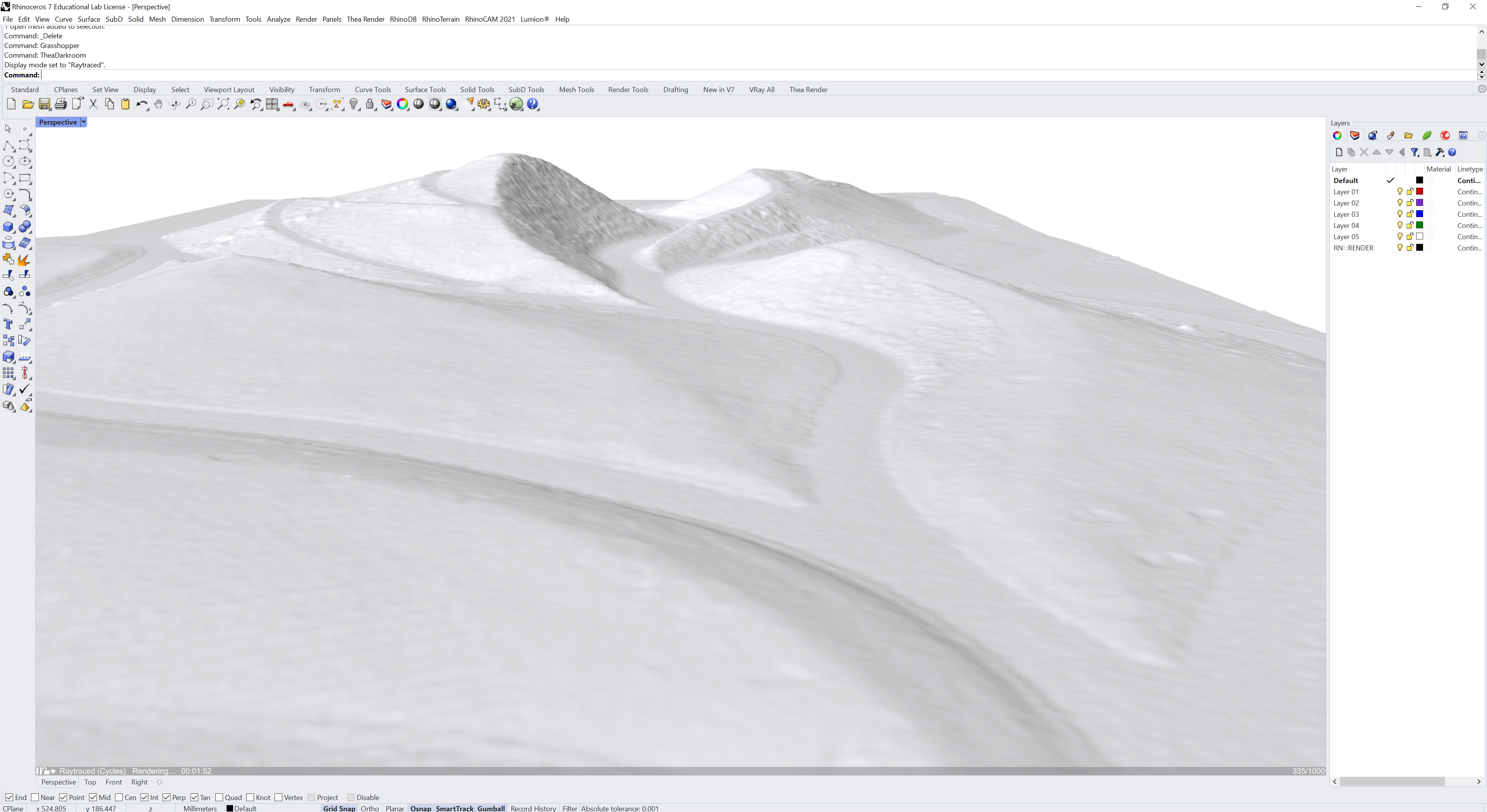 This tutorial is a gentle introduction to terrain modeling with Grasshopper. The tutorial begins with a brief guide to the basics of Rhino’s visual programming interface, Grasshopper. Then it covers how to import, model, grade, and analyze terrain using the Docofossor plugin. Materials for this tutorial include videos, a dataset, and an example:

This part of the tutorial covers how model basic geometry - such as points, lines, meshes, and surfaces - in Grasshopper. First start Rhino. Type grasshopper in the Rhino’s command line to launch the visual programming interface. The Grasshopper interface has a menu bar, a toolbar with parameters and components, and a canvas for composing diagrams. Parameters are used to set and store data. Components are functions for performing operations. Drop parameters and components on the canvas and connect them together with wires to create node based diagrams that generate geometry in Rhino. A visual programming diagram composed in Grasshopper generates geometry in Rhino. Grasshopper’s visual programs are called definitions. Download the example definition fundamentals.gh as a guide for this section.

In Cartesian space a point is defined by x, y, and z coordinates. In Grasshopper points can either be constructed from x, y, and z coordinates or drawn in Rhino and referenced in Grasshopper. One way to define a point is with the Construct Point component. Find the Construct Point component in the Points panel of the Vector tab. Drop this component on the canvas. Then add input data for the x, y, and z parameters using Number Slider parameters. Find the Number Slider parameters in the Input panel of the Params tab. Or double click on the canvas to search for a component and then type in either number slider or a value for the slider such as 10. Connect wires from each of the output nodes on the right side of the number sliders to the respective input node on the left of the Construct Point component. Drag the handle on each slider to a set x, y, and z values for the point. 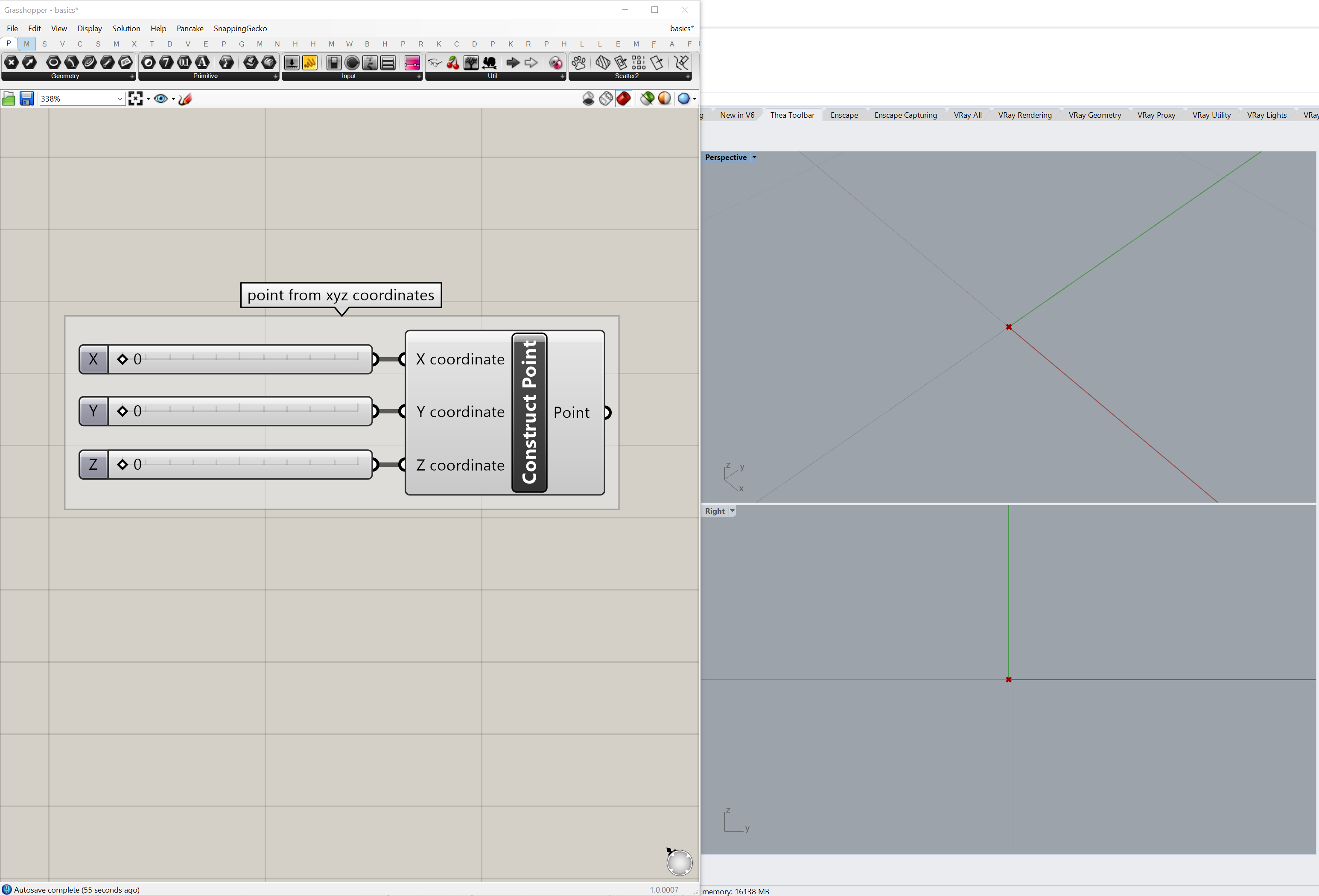 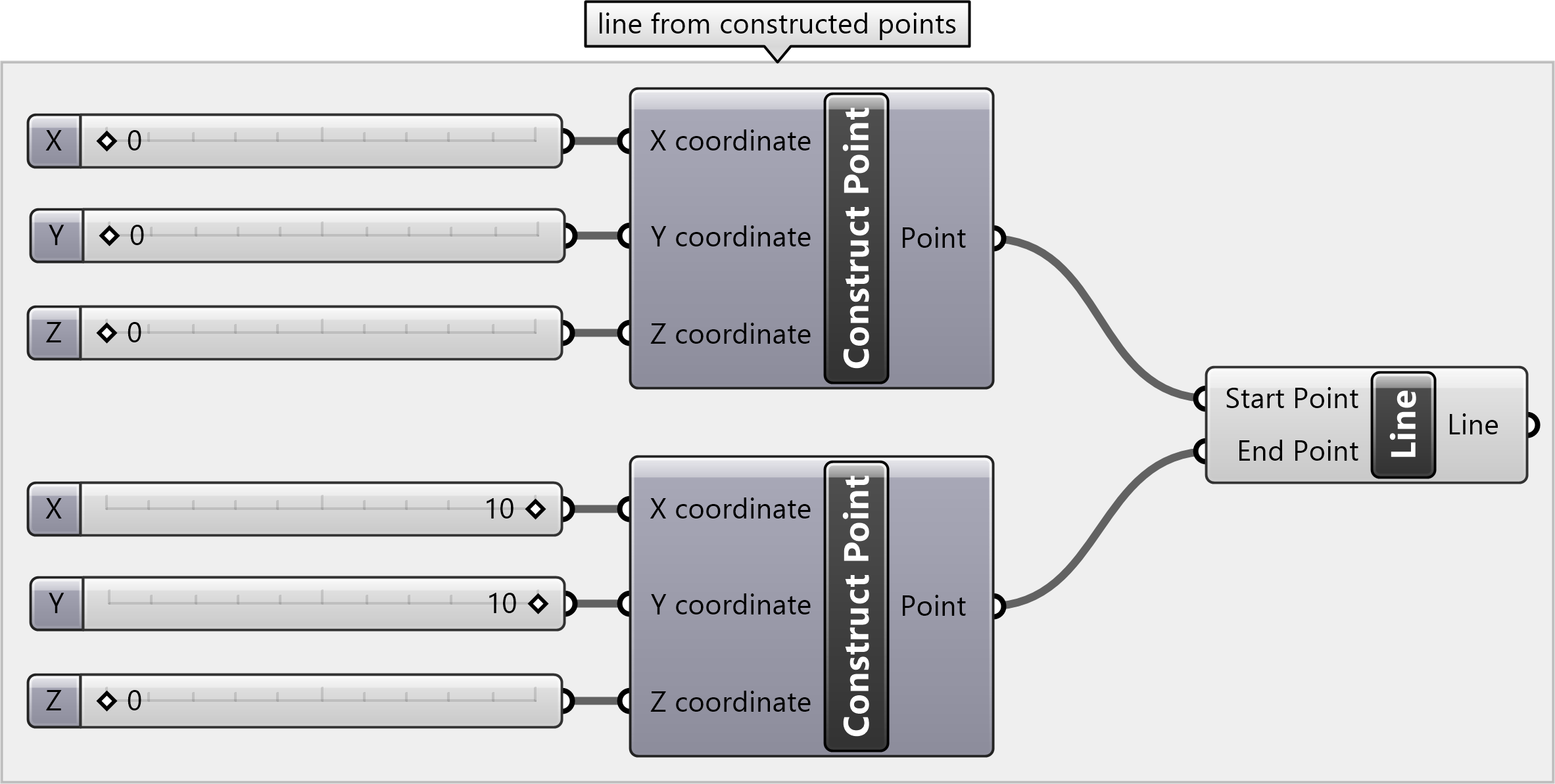 A mesh is a set of connected polygons composed of vertices, edges, and faces. Meshes are often used to represent topography. In Grasshopper, a mesh can be generated from a set of points using the Delaunay triangulation algorithm. 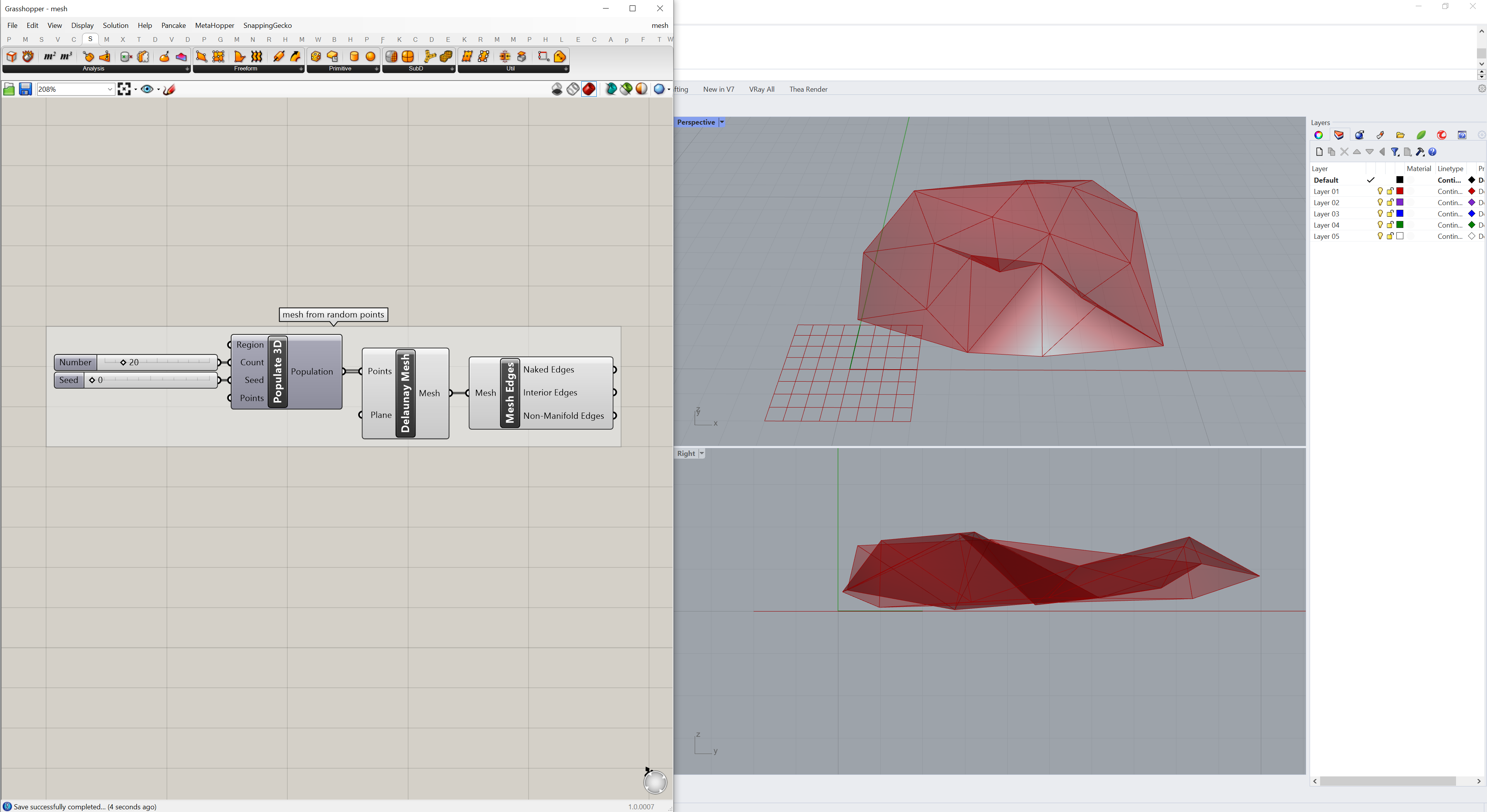 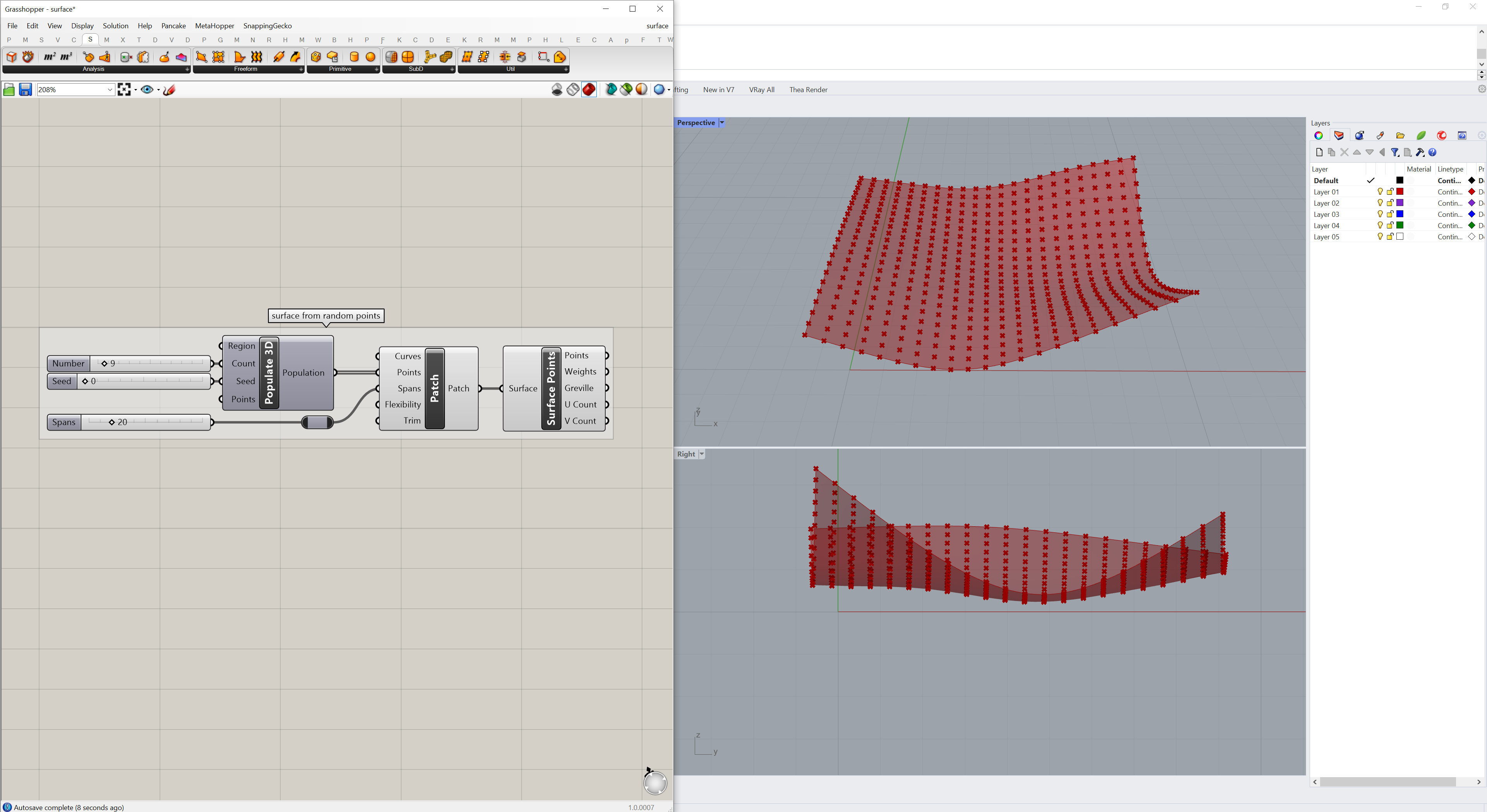 This part of the tutorial covers terrain modeling with the Docofossor plugin. Download the example definition topographic-modeling.gh as a guide for this section.

Docofossor, is a Grasshopper plugin for efficiently and iteratively modeling terrain using signed distance functions. In Docofossor terrain is represented as a grid of elevation values (Z). Docofossor’s signed distance field (df) data structure has a header that defines the properties of the grid and then a list of Z values. This grid of values can be transformed using signed distance functions, enabling an efficient, iterative process for terrain modeling in Grasshopper. To visualize the terrain data in Grasshopper the grid can be converted into either 3D points or a quadrilateral mesh. To install this plugin on Windows first download Docofossor, right click on the zip archive to open properties and unblock it, then extract the zip archive, move the contents to your Grasshopper components library, and restart Rhino and Grasshopper.

Download the gridded point cloud governors-island-landform.xyz for the Hills of Governor’s Island. In Grasshopper add the file path for this dataset to your canvas as a parameter. In the Params tab under Primitive select and add a File Path parameter. Right click on the parameter, choose select an existing file, and set the path to the downloaded .xyz data. In the Docofossor tab under IO add the dfImportXYZ component. Set dfImportXYZ’s input parameter f to the File Path parameter to import the point cloud as a Docofossor grid (df). Optionally add a skip parameter n to reduce the size of the point cloud. In the Docofossor tab under Grid add the dfGridShift component and set the grid as its input df to shift the grid to from its geographic coordinates to the XY origin of the local Cartesian coordinate system. In the Docofossor tab under Geometry add the dfGridMesh component to generate a quadrilateral mesh from the shifted grid. 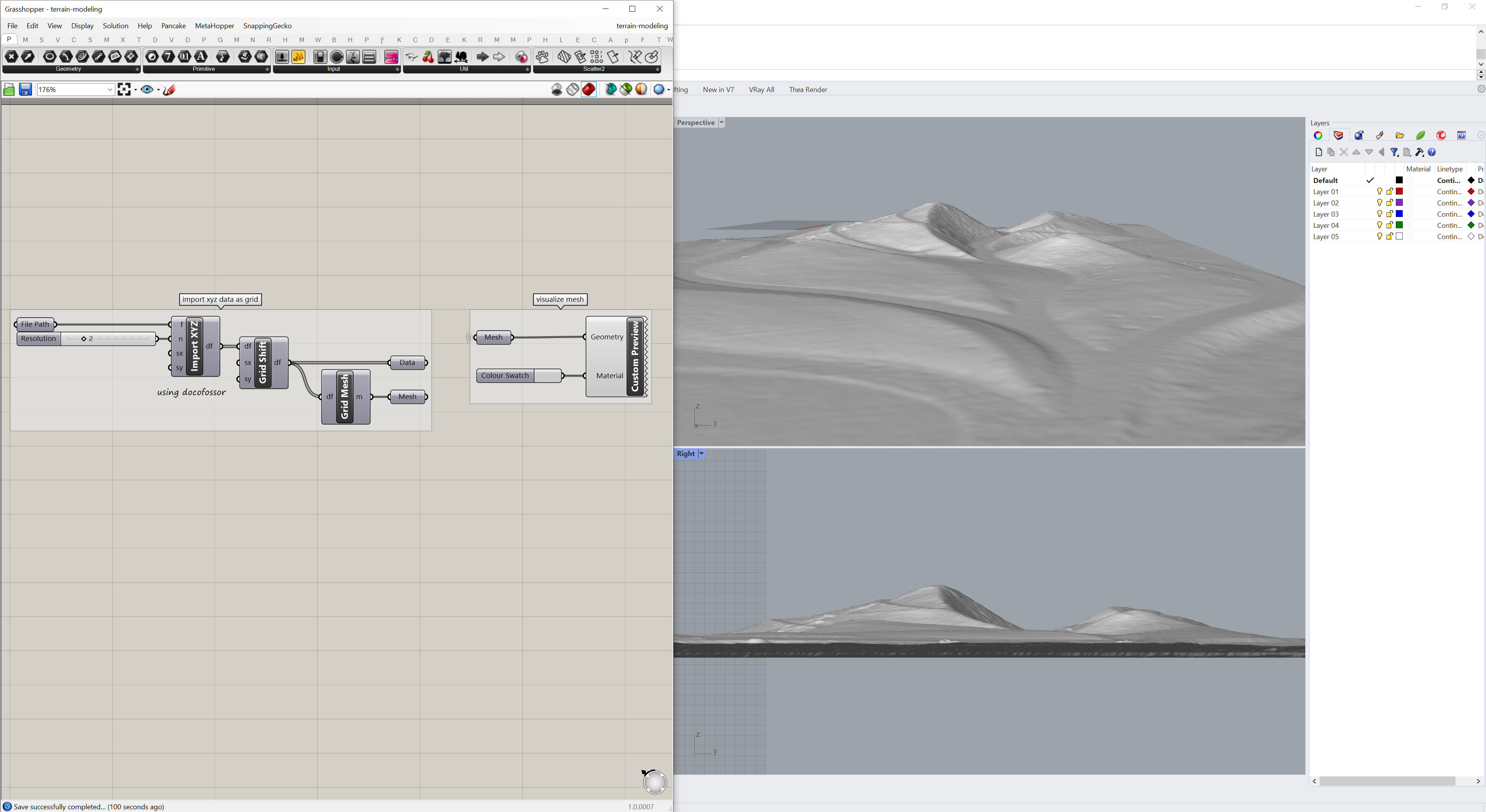 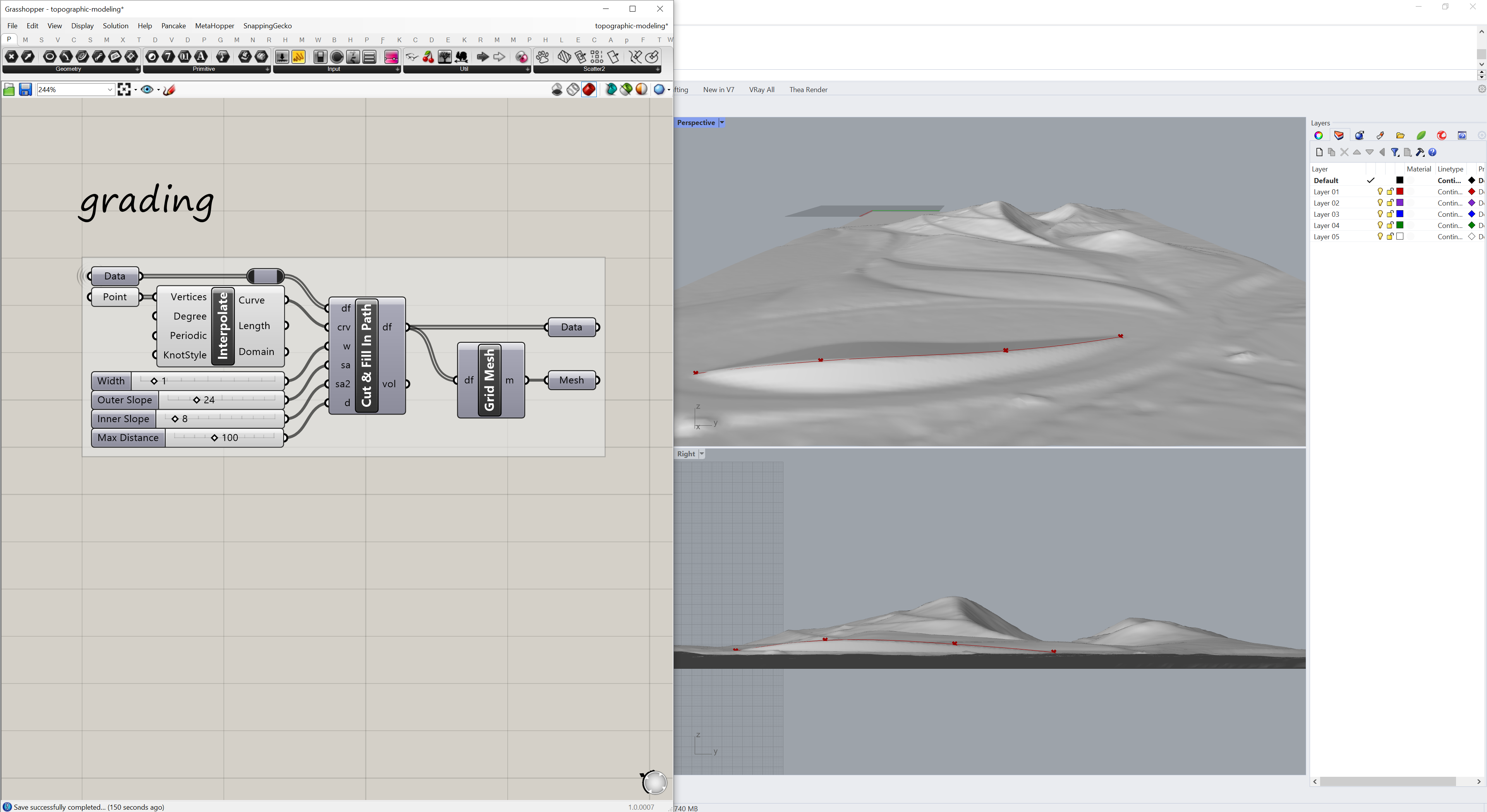 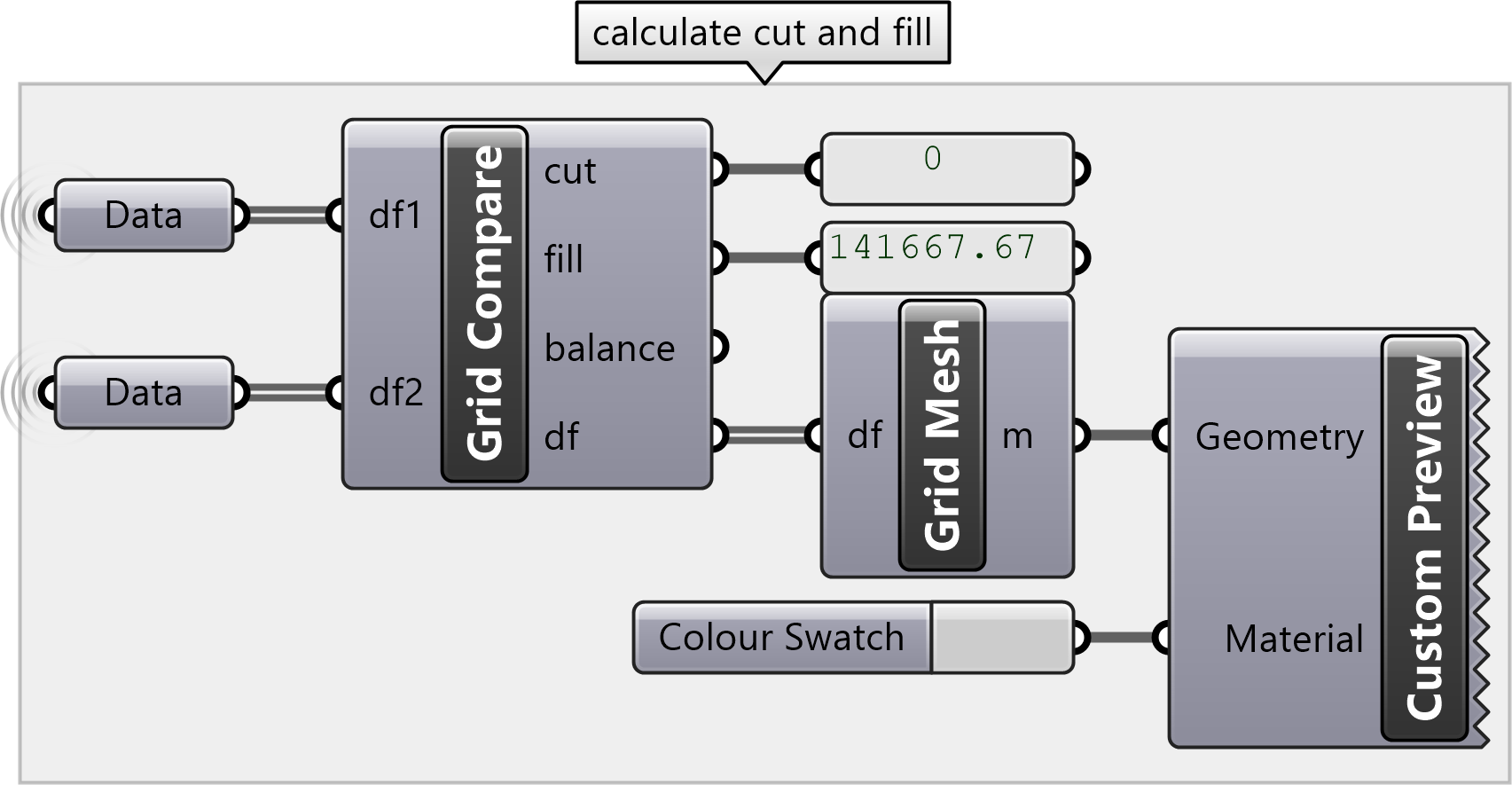 Since Docofossor expects points to be listed from left to right and from bottom to top, XYZ point clouds that are sorted differently - such as governors-island-landform.xyz - will be mirrored vertically. To fix this use the mirror component with the grid mesh as the input geometry and an XZ plane with its origin set to the center of the mesh as the input plane. Find the center of the mesh using the area component. Connect a custom preview with a color swatch to the output mesh to better visualize the terrain.

Use a cutting plane to visualize flooding or sea level rise. Create a surface and move it along the z-axis to visualize changes in sea level. 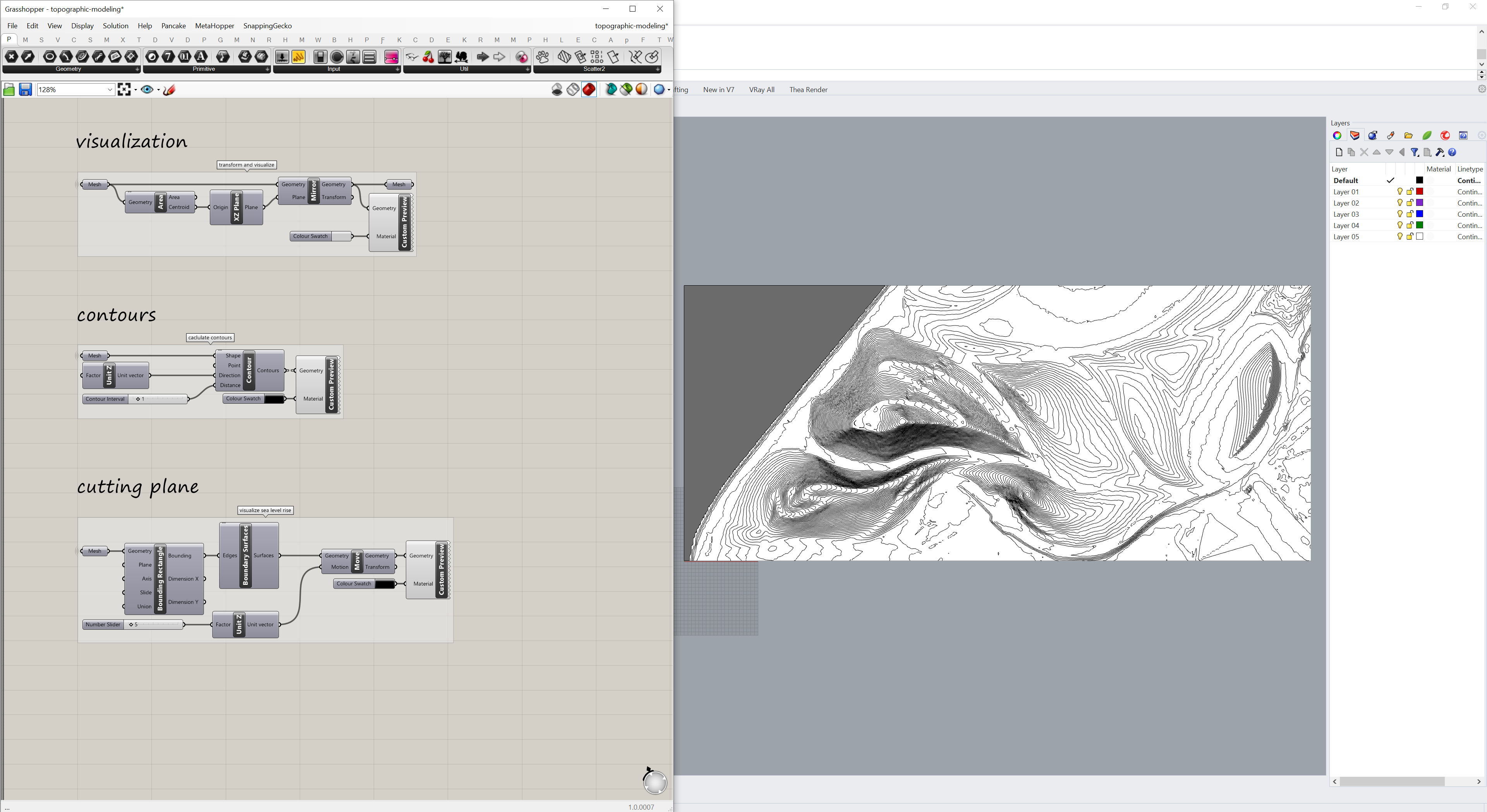 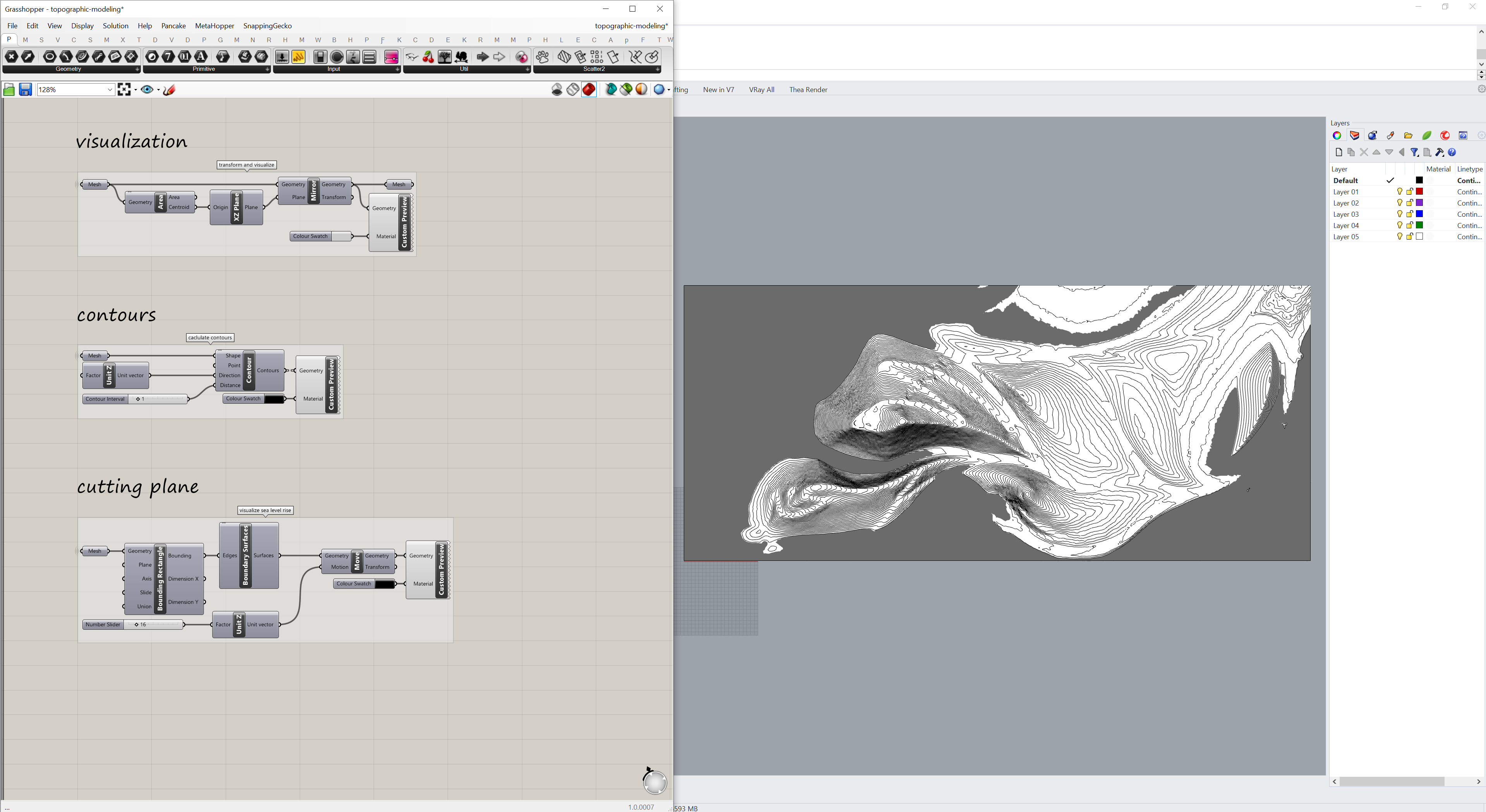